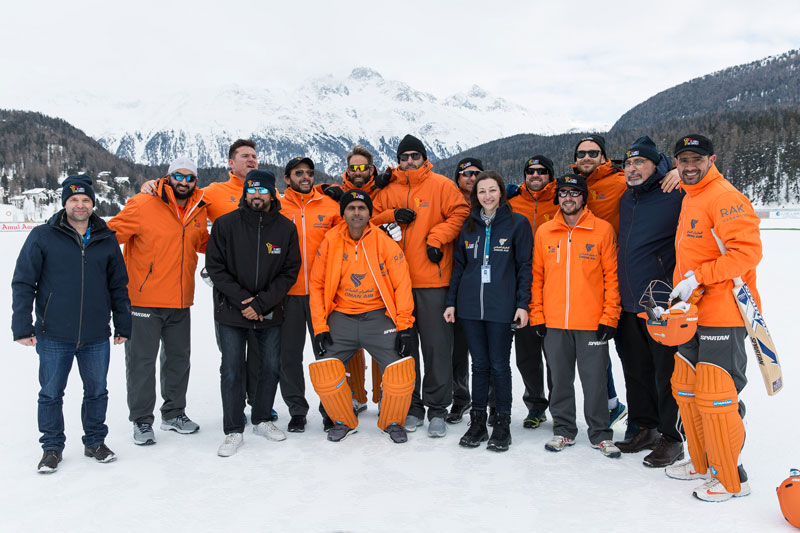 ​​Team Royal emerged victorious in the Ice Cricket 2018 after they defeated​ ​Badrutt’s palace Diamond by 8 wickets. Chasing a target of 206 runs, the Royals rode on emphatic batting display by Jacques Kallis and Graeme Smith. The former South African players notched up individual half-centuries. While Smith was out​ ​at​ ​58, Kallis remained unbeaten at 91. Earlier, in the day, Badrutt’s Palace Diamond scored 205/2 in 20 overs. Andrew Symonds and Kaif scored very good half-centuries for their team​ ​while Sehwag smashed 46 in a series that most of time was played between -5 to -12 degrees Celsius making it the most unique location to play cricket.

There was a good crowd that came to watch the second game of the tournament. A lot of cricket fans came from different parts of Europe to watch the cricket legends brave the chill. The 2 day tournament not only witnessed the seriousness towards the game by legends such as .​Virender Sehwag,Andrew Symonds, Mahela Jaywardene, Tilakratne Dilshan, Michal Hussey, Ajit Agarkar, Shahid Afridi, Shoaib Akhtar, Abdul Razzak , Nathan Mccullam but also showcased their lighter side where they were seen having a great time with those who were once their contemporaries and arch rivals. With names like Charu Sharma and Wasim Akram behind the commentary box, the 2 day ice cricket affair gathered a sizable response from the patrons.

In the words of Vijay Singh “Following our vision to be unique in our approach, we are delighted to organised world’s first ever ice cricket tournament and are thrilled to witness the success of this specially curated tournament. Embarking on a true spirit of sportsmen, we would like to congratulate the winning team for being a part of the historical finale.Today marks a day in the history of cricket where we have witnessed sportsmanship where sports have gone beyond boundaries and all the players were commendable.I would like to thank the whole team of VJ sports, Mr. Akhilesh Bahuguna, Director, Allspheres entertainment pvt ltd. for being so supportive and believing in me and this unique concept. I would also like to thank our sponsors,Amul​ ​India -Title sponsor,Oman Air,TeppichDoktor-Silver Sponsor and Official Carrier and​ ​Badrutt Palace-Team Sponsor, RaK ceramics​ ​Associate Sponsor and Spartan Sports -Kit Partner and team of experts who ensured that we have a smooth run of events at the inaugural edition of Amul St. Moritz Ice Cricket.

​The unique two-day event against the serene and breath-taking backdrop of the Swiss mountains which hosted two matches in two days. The lake freezes into an extremely thick layer of ice which then gets covered by the soft falling snow, enabling the lake to withstand more than 200 tons of weight, which makes it the perfect area to construct a pavilion village and grandstands to watch and support the festivities. The two teams, Badrutt’s Palace DIAMONDS and ROYALS already have star-studded cricketers like Shahid Afridi, Virender Sehwag, Mohammad Kaif, Mahela Jayawardene, Lasith Malinga, Shoaib Akhtar, Michael Hussey, Graeme Smith, Jacques Kallis, Daniel Vettori, Nathan McCullum, Grant Elliot, Monty Panesar, Owais Shah, to name a few. The itinerary boast of a scenic tour of the Swiss local and a gala dinner where the fans got a chance to rub shoulders with their favorite cricket personalities.